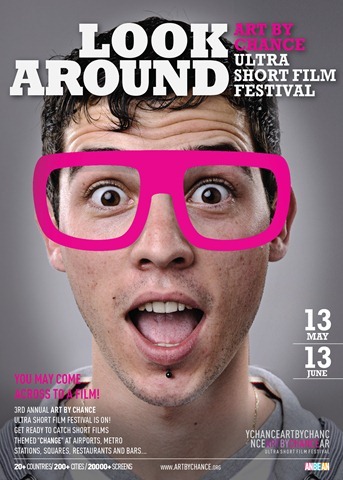 ART BY CHANCE is opens to films of all kinds; fiction, animation, documentary and video art with the exception of training and advertising films. Check their videocalling :

DOTMOV, a digital film festival aiming to discover talented creators and provide them with an opportunity to show their works. Works submitted from all over the world will be screened throughout the world venues from November 2010 (screening schedule will be different depending on the venue). Last year’s total submission was 264 works from 30 countries.

Shift and guest creators will select works to show at the event from all those that arrive before the deadline, September 10th, 2010.

If you like to participate check the details here:

ART BY CHANCE is a brand new Ultra Short Film Festival that aired May-June-July 2009 in 13 countries and in over 70 cities around the world for the first time and was viewed by more than 1 billion people worldwide.

ART BY CHANCE-10 will take place in May 2010 in several countries and cities around the world again. ART BY CHANCE submission is now open forTIMEthemed 30 second films!

Art by Chance 2010 has set out to explore how the perception of time is unique to every individual and how time can influence the narrative of city life, one of modern man’s greatest challenges.

Films touching the untouchable theme of time in their own time. It’s time to move!

Europe’s longest running Disability Film Festival ‘Wie wir leben!/The Way We Live!’ invites filmmakers from all over the world to enter their latest work for preselection. The festival is looking for provocative, radical, fresh, controversial, excellent films which represent people with disabilities, chronic or mental illnesses, their lives and their experiences.

The festival has proved an excellent platform for young filmmakers and to launch films within the disability film circuit.

The films entered should be no longer than 60 minutes and produced in 2007 or later. They can be fictional, documentary, animation or experimental films.

A selection of about 30 films will be screened in our international competition programme.
There are three awards, presented by an international jury, as well as an audience award.

The Ellensburg Film Festival celebrates the art, innovation and culture of filmmaking and film-viewing by showcasing the best in global, independent, documentary, and short films. Our motto is simple: See the EFF films, talk about the EFF films, live the EFF experience!