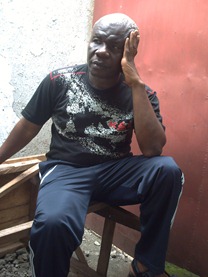 The winner of the 2009 Freedom to Create Imprisoned Artist Prize, Lapiro de Mbanga, was released from prison in Cameroon after three years imprisonment under harsh conditions. Early in 2008, angered by high living costs and a constitutional change that would allow the president to stay in power indefinitely, people in Cameroon took to the streets. Amid nationwide strikes and mass demonstrations, popular singer Lapiro de Mbanga, who had demanded that the president resign, was arrested and charged with inciting youth unrest. In September 2008, he was jailed for three years.

Commenting on his release, Freedom to Create spokesperson Priti Devi said, “We are delighted that Lapiro de Mbanga has finally been released from imprisonment. We hope that he will continue to use his talent to inspire others to challenge and change the world through creativity and the arts, so that we all may flourish.”

“In the developed world, we take our creative freedom for granted. But in many societies, political repression, intolerance, ignorance and religious extremism inhibit creative expression, especially for women. Artists play an important role in breaking these barriers and championing creative, economic and political freedom.” Priti Devi added.

For nearly 20 years, Lapiro has used the power of popular music to campaign for social reform. Freemuse, the campaigning forum which nominated Lapiro for the 2009 Freedom to Create Imprisoned Artist Prize, described Lapiro as someone with rustic wisdom who provided a cultural prism through which Cameroonians interpreted and commented on political behaviour. “His songs constitute a cultural megaphone by which the disenfranchised and politically endangered can vicariously exercise free speech.” they stated.

Lapiro de Mbanga was imprisoned for his song ‘Constipated Constitution’, which was critical of President Biya of Cameroon. Lapiro was awarded the Freedom to Create Imprisoned Artist Prize in 2009 for his courage and creativity, and only received his trophy earlier this year, when campaigners for his release visited him in on Music Freedom Day on 3 March 2011. Lapiro’s case was followed internationally and last year, a petition was made to the UN for arbitrary detention.

The Freedom to Create Prize

The Freedom to Create Prize celebrates the courage and creativity of artists who use their talents to build social foundations and inspire the human spirit. Artists serve as champions of the freedom of expression essential for healthy societies and vibrant economies. They play an important role as positive change agents, expressing the aspirations and angst of ordinary people.